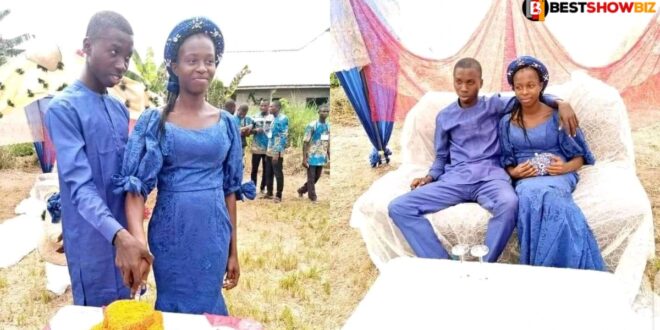 While “child marriage” is generally used to refer to weddings that take place before the age of 18, many girls marry far younger. Families in certain nations force girls as young as seven or eight years old to marry much older males.

Girls marry for a number of reasons, and many parents believe that marrying their daughters will protect them and increase their economic opportunities. On the other hand, child marriage puts girls at greater risk of sickness and violence, restricts their access to social networks and support systems, and perpetuates a cycle of poverty and gender inequality.

Early marriage is a worldwide problem that has a number of severe health and social consequences for young women. Community-based methods must be included in effective health programs to avoid early marriage. Ghana’s government and health researchers, on the other hand, have paid little attention to it.

In spite of this, photos circulating on social media shows two teenagers getting married in a traditional wedding.

many people are however in support of this because they claim it will save the couple from committing fornication and other forms of sins.

see the photos below.