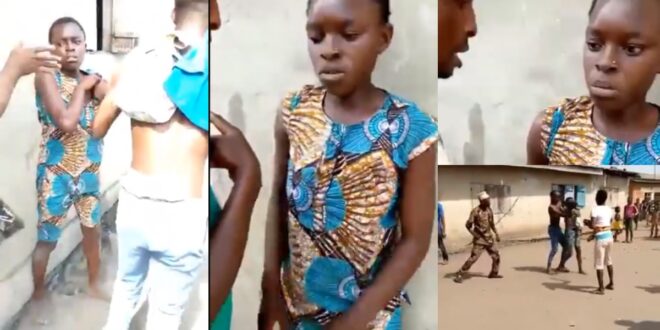 16-year-old girl who has 4 kids already, caught cheating on her husband (video)

In a viral video, a 16-year-old girl of four is seen being scolded by her lover for cheating and getting pregnant for another man.

A twitter user posted the unbelievable tale on the social media platform.

The young girl is a mother of four, according to the twitter user, but the children’s father does not look after them. Her first lover was enraged when she went after another man.

So, I happened to witness a 16-year-old who already has 4 children for another man entirely but the present husband is the one taking Care of the kids. She got involved with another guy again who got her pregnant, slept at his house overnight. the husband found out and they

Read Also  Mcbrown and Benedicta Gafah unfollow each other over cheating allegations.

Brought the issue to the community leader. This girl started fighting the husband who has been taking care of 4 kids that aren’t his for years. This girl is just 16 ffs and she is expecting her 5th child. Scum has no gender