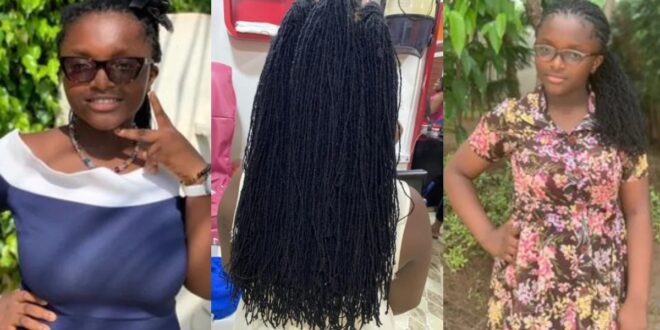 Veronique Nayra Dagadu-Gokah, a lovely 12 years old Ghanaian girl who has kept her natural hair for seven years in college, has been asked to cut it short.

According to Veronique’s uncle Frank Atsu Agbavor and mother Lois Penu, who talked to YEN about the case, the young girl was physically exhausted as a result of the announcement.

Veronique has already been the number one in her class for a long time with her natural hair on, which is why the recent directive has caused her concern.

“This term as she’s going to junior high school, the headmistress asked her to cut off her dreadlocks or she should leave the school,” Frank told YEN

The young girl has been moved to a new school, according to Veronique’s mother, because the school administrators are firm about their directive.

“But we need to create awareness for Black people to stop treating one another in this manner. This girl is keeping her natural hair, not anything else. So why should she cut it all of a sudden?” she added.

It’s unclear if the school’s latest directive was prompted by recent reports of Rastafarians being dismissed at Achimota School.